Alma W. Thomas, a Black woman artist, broke color barriers on and off the canvas.

Born a generation after slavery, Alma Woodsey Thomas grew up in the South, in a home where education was a priority. At 16, with racial tensions high and no further schooling options, her family moved to Washington, DC, where she started her incredible life of firsts: the first Fine Arts graduate from Howard University (1924), the first African-American Woman to mount a solo show at the Whitney Museum of American Art (1972), and the first African-American woman to exhibit her paintings in the White House (2009). All the while, she taught art at Shaw Jr. High for 36 years, pioneered educational techniques, travelled the world, and crossed racial barriers. Yet she did not receive national attention until six years before she passed.

“Miss Alma Thomas” is the first documentary film that explores Thomas’ incredible life through the lens of curators, art specialists, scholars, and her family, and award-winning actress Alfre Woodard as the voice of Miss Thomas. Released in conjunction with 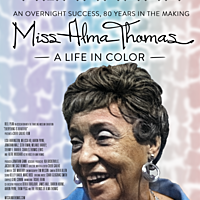