Kano: An American and His Harem

A portrait of a dysfunctional family.

An American Vietnam War hero decides to spend the rest of his post-war life in the Philippines. Hundreds of women have come and stayed in his house located in a poor, remote village. In 2001, Pearson was charged with over 80 counts of rape.

Pearson is now in jail but many of the women remain by his side. â€œKanoâ€ is the fascinating and awful story of a convicted rapist and his women who come together to form a most dysfunctional family.

Kano is Tagalog slang for Amerikano. 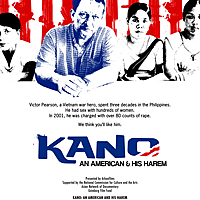