The Foreigner's Home- Toni Morrison at the Louvre

The Foreigner’s Home is a feature-length documentary film that explores the vision and work of Toni Morrison through “The Foreigner’s Home,” the 2006 exhibition she guest-curated at the Louvre. Morrison invited renowned artists whose work also deals with the experience of cultural and social displacement to join her in a public conversation that she had been pursuing for years through her own research and writing and in her teaching at Princeton University. The film expands that conversation, combining exclusive and unreleased footage of the Nobel Laureate in dialogue with artists—first, in Paris in 2006 and then, in 2015, at her home in New York state—with extensive archival film footage, music, and still images to present a series of candid and incisive exchanges about race, identity, “foreignness,” and art’s redemptive power. 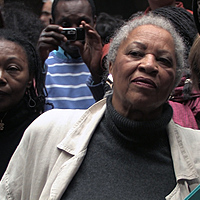