Eleven Jewish youths talk about themselves, their religion and anti-Semitic experiences.

“We are no aliens,” they say, wanting only one thing: to finally be seen as normal young people. Eleven Jewish youths talk about themselves, their religion and anti-Semitic experiences.

What does it mean to often be the only Jew at the whole school? When you constantly have to deal with clichés and stereotypes? A film about everyday life for young people between sports field and synagogue, Torah and Instagram, Shabbat and party nights.

In German schoolyards “Du Jude!” is a common swearword. Anti-Semitic sayings, tasteless jokes and annoying prejudices are part of everyday life for young Jews in Germany. For them, it is a sad matter of course that they cannot wear their kippah or Star of David necklace openly everywhere – for fear of vulgarity and assault.

On the other hand, they want to get out of their role as victims. Ilan (20) says: “For many people we are a fringe group that is simply always humiliated. But it is wrong that we are reduced to that”. A 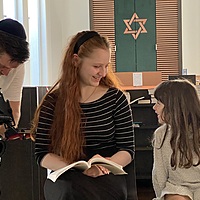