A four (4) part Docuseries, an examination of what passes for Black Television and “black” character-driven TV today. An in depth look at the extent to which it’s just another Minstrel Show, “white” imagery in Blackface. [Thesis: What we have coming out of Hollywood and its imitators is essentially “white” TV (tropes, concepts, forms) masquerading as “black.” “White” with a “black” veneer.]
Provides a history, using examples, beginning with the Minstrel Show form and how that basic format/formula continues despite having “black” producers/creatives working in the medium and despite having so-called Black networks.
The entertainment form began as a “white” one and has hewn to that form ever since. Blacks who are working in the medium today haven’t really innovated nor strayed too far from what the industry deems right and proper for “black” folks in both form and content, in front & behind the camera. 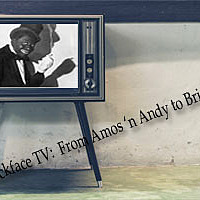