Are you there, Andy?

Video from Are you there, Andy?

Andy Kaufman supposedly died of lung cancer 36 years ago, and many people are sure he’s really gone. Others, not so much. I’m obsessed with Andy Kaufman and this documentary chronicles my quest to find out where the comedian has been hiding all these years. As I begin to navigate life after college, I investigate the claims made by his former writing partner and best friend, Bob Zmuda. For years, Zmuda has said that in 1984 Andy faked his own death and has been living in hiding ever since. Many of his fans hold on to the belief that Andy is somewhere off the grid, and will someday return to the spotlight. I go down the rabbit hole, using clues and theories dropped by Zmuda, hoping to someday bring Andy back onstage for his standing ovation. 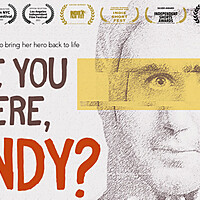