The Dark Side of Sunshine

Discussions of congressional transparency go right back to the founding of the United States. And throughout time, greater ‘publicity’ has been broadly understood to degrade the legislative process as it confers benefits to factions – outside lobbying and powerful special interests. This documentary seeks to question that belief, focusing on pitfalls of legislative transparency from some of the most celebrated political scientists, journalists and politicos. Based on observations by Alexander Hamilton, James Madison and other important historical figures as well as hundreds of scathing remarks by many of the top political scientists of today – including multiple scholars from Harvard, Princeton, Stanford, etc. In short, a surprising consensus appears – open door committees and public ‘roll-call’ voting leads to gridlock, partisanship, legislative warfare, soaring campaign finance and special interest capture. This is precisely what we see in the wake of the 1970 sunshine laws 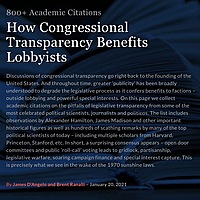