Clip from the documentary

Gordon Buchanan is rehabilitating six orphaned baby grizzly bears back to the wild in just nine months. Gordon joins the Pazhetnovs, a pioneering family of biologists in snowy Russia, as they attempt to rehab grizzly bear cub orphans. There are over 100,000 grizzlies in Russia and, as humans encroach further into this vast wilderness, conflict is increasing. Every year, hundreds of baby grizzlies are abandoned when their mothers are disturbed at their dens.

The Pazhetnovs have been rescuing orphaned cubs for nearly three decades and have successfully returned over 200 of them back to the wild. Gordon arrives in February, when six cubs have just been rescued. They are just five weeks old, and each weighs less than a bag of sugar. The group is made up of three pairs of brothers. Slava and Pasha were dumped in a bin near Moscow, and it is suspected that poachers killed their mother. Tolya and Tyoma were found in a box outside a vet's in St Petersberg. Zhenya and Zhora were handed in by l 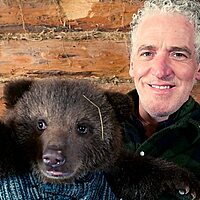