Theft in the cradle. The search for truth, justice and reconciliation.

SBOS chronciles the ongoing struggle of over 300,000 Spaniards to find out their true ancestry and reunite with loved ones. Taken at birth, many of these babies (now adults) face an indifferent, hostile and corrupt system (government and church) in their search. Surviving parents know that time is running out as they too, search, for their grown-up babies. As SBOS makes clear, this decades long network of baby stealing and selling started as political revenge and evolved into profiteering with politicians providing cover for doctors, nurses, nuns and priests to perpetuate deception over a trusting and obedient society. Despite international calls for reform and justice, Spain's leaders, many of whom are political descendants of the former dictator Franco, ignore these calls. And, worse, do their best to thwart anyone ever being held acocuntable for these crimes. The twist? SBOS also shows how many babies were taken from Spain and smuggled around the world and now tell their story.

The film profiles several stolen babies, depicts how many try and raise awareness through rallies, judiciary exhumations, lobbying, and opening legal cases as well as a behind-the-scenes look at he only trial yet held on this issue-Madrigal v Vela and its stunning verdict and impact. 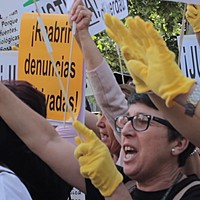