Albert Einstein: Pauling is "one of the most inventive scientists of [the 20th] century."

Pauling is the only person in history to win two unshared Nobel Prizes, and in two different fields: Chemistry and Peace.

"Moving and effective... exhilarating and inspiring. Superb use of a great variety of film techniques to create a smooth, continuously interesting and stimulating film that provides powerful insights."
—Educational Film Library Association

New Scientist, the British magazine, ranks Pauling among the 20 most influential scientists in history, in company with Darwin, Galileo, Newton; and Einstein, the only other 20th century scientist listed.

The documentary traces Pauling's unique achievements as both scientist and peace crusader. He enthusiastically describes the events leading to his first Nobel award, for chemistry, while innovative footage depicts his research into the structure of matter, his role in the science of molecular biology, and his race against Watson and Crick for the discovery of the double helix. His disputed Vitamin C crusade is also frankly depicted..

Pauling became one of America's most controversial figures in the early 1960s when he helped lead the "Ban the Bomb" campaign and appeared as the featured guest before hostile interviewers on "Meet the Press." His persistence and leadership led to Pauling's Nobel Prize for Peace. It was announced in 1962 on the day President John F. Kennedy signed the Limited Nuclear Test Ban Treaty.

"Linus Pauling, Crusading Scientist" is both a warm, personal biography and a scientific adventure through some of the most compelling moments of the last century. It is about a genuine American original, an inspiration to students, aspiring chemists, activists and anyone interested in learning about an extraordinary human being. 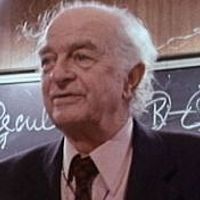