How often do you see a child marriage being negotiated over in real time by real people?

“Educated; Not Trained” follows a band of young girls in rural India fight through sexual assault, cultural misogyny, and the daily risk of child marriage to pursue their dream of an education and try to defeat the multi-generational cycle of poverty.

The documentary introduces the audience to the challenges they face growing up in a country which has been ranked the worst G20 nation in which to be a woman. We follow 16-year-old Rashmi being removed from school by her parents in order to get her married. We see the Child Protection Officers’ negotiations with her family to allow her to stay in school and get an education, and the culmination of police charges being filed against the father.

In our story, child marriage is a dark shadow looming over the girls’ desire for independence, their struggle to survive and their pursuit of education. Families in India practice a dowry system and often girls are a financial burden to her own family and of little value. The younger the gi 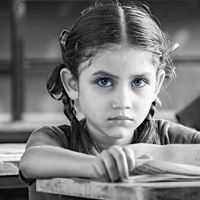