Who are you when you're from everywhere and nowhere? ALIEN CITIZEN: An Earth Odyssey is the award-winning film of an internationally toured, funny and poignant one-woman show about growing up as a dual citizen of mixed heritage in Central America, North Africa, the Middle East, and New England. Elizabeth Liang is a Global Nomad or Third Culture Kid (TCK). Third Culture Kids are the children of educators, international business people, diplomats, missionaries, the military--anyone whose family has relocated overseas, usually because of a job placement. Liang weaves humorous and harrowing stories about growing up as an Alien Citizen abroad with American commercial jingles providing her soundtrack through language confusion, first love, "racial ambiguity," culture shock, bullying, Clark Gable, and sandstorms. 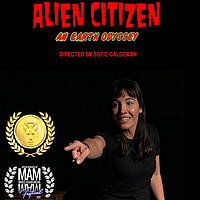