Father Roy: Inside the School of Assassins

The struggle to find and reveal secret torture training at a U.S. military facility.

Video from Father Roy: Inside the School of Assassins

Abu Ghraib and Guantanamo are not the first time the U.S. has been involved in torture. This documentary reveals the struggle to expose a CIA secret torture training facility on the grounds of Ft. Benning, GA. The story is told through the daring actions of Father Roy Bourgeois, a Vietnam war hero who risked his freedom and life many times in the campaign to close the training facility. Called US Army School of the Americas (SOA), now it is named the Western Hemispheric Institute for Security Cooperation.

Three men, each from a different Latin country, link SOA to torture training. One discovered an SOA torture-training manual. The other two were trained in torture techniques at SOA. In 1996 the White House Intelligence Oversight Board confirmed their explosive charges.

At the risk of his life, the producer was pledged to never disclose the identity of one of these three men, who feared for his own life because of the shocking information he revealed.

"One of the outstanding documentaries of 1997."
—Academy of Motion Picture Arts and Sciences 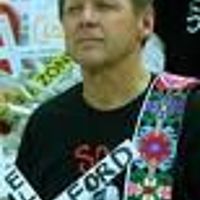