A journey from private to collective, from sadness to light, from the village to the Universe

Starting from El Toboso, emblematic place of La Mancha that inspired the most famous Spanish novel “El Quijote”, and that it’s also my birth land, I embark on a tour with the one-woman show “Dulcinea speaks out”, visiting some countries in America and North Africa.

Cervantes wanted to go to the New World, but his requests were always rejected by the Council of the Indies. However, his works have traveled far and wide, all over the planet. And from the hand of his characters, I run away from my depressing family situation, after my father died. Perhaps, having been conceived in a prison, “El Quijote” causes the effect of infusing light, where there is darkness. And becomes a passport that takes me from sadness and isolation, to new happy landscapes.

I collect images of other artists who have been inspired by this illusory character; Dulcinea, that become a symbol and model of the social perception of women. And while, Cervantes, has come to conquer the sidereal space. By popular vote 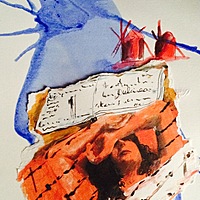