In a Nutshell: A Portrait of Elizabeth Tashjian

"In a Nutshell" chronicles the unique life of Elizabeth Yegsa Tashjian: at birth in 1912, a first generation American of aristocratic Armenian immigrants; at age nine, a concert violinist living on Manhattan's upper west side; at twenty-one, an award-winning classical painter studying at the National Academy of Design in New York; at age forty-seven, a devoted Christian Science healer; and, at the youthful age of sixty, creator of the one and only Nut Museum. At ninety-two years old, Tashjian found herself immersed in a strange new chapter of her prolific life. After a series of tragic events surrounding her health and finances, she was penniless and confined to a nursing home against her will. The contents of the Nut Museum were permanently removed and her beloved home sold to the highest bidder. Declared insane by her state-appointed conservators, Elizabeth Tashjian fought to preserve her identity and regain the life she built. 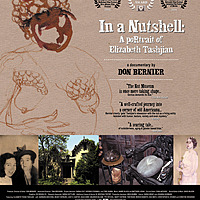