One man's fight. Another man's honor.

In 2014, twenty-four servicemen were awarded America’s highest military recognition, the Medal of Honor for their valorous acts in either WWII, Korea or Vietnam. Why were some of these servicemen overlooked for nearly seventy years? These men of various colors and ethnicities were denied the award during a period that is often defined by integration and the civil rights movement. Was their denial sparked by discrimination or just a simple oversight?

Unforgotten 24 is a story of one man’s fight to ensure his fallen childhood friend received the Medal of Honor and how that fifty year-long battle lead to twenty-four other servicemen receiving their proper recognition. Eyewitness accounts, interviews with historians, and testimony from a senior legislative assistant illustrate the enormous struggle that it took to bring due honor to these forgotten men. Set against the political, historical, and social backdrop of the era, this film shares the heartbreak and joy of five distinct families 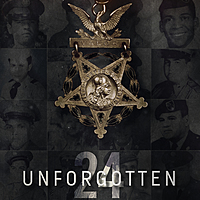