Wake Up on Mars

Furkan, the youngest member of a Roma family living in Sweden, attempts to come to terms with the mysterious illness of his two sisters. Ibadeta and Djeneta have been in a coma-like state for several years, victims of what has been named the "resignation syndrome." Traumatized by the thought of being sent back to Kosovo, their homeland, their minds and bodies have suddenly gone to sleep.

In central Sweden, his family attempts to rebuild a normal life, but so far their asylum applications have been refused one after the other.

Furkan tries to escape his reality by building his own spaceship to fulfil his dream: to go live on Mars and save his two sisters. At the core of this film lies this one question: “What happens to human beings, and in particular children, when all hope is gone?” 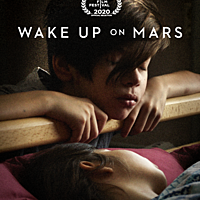