He went to war with war.

LOGLINE: When a young man applies as a conscientious objector to the Vietnam war, he must battle the country he loves; bear scorn from his family, friends, and fiancée, and face a five-year prison term.

For refusing induction in Virginia, Francesco Da Vinci was threatened with a five-year prison term, and became the target of intense intolerance that spilled over to his family and fiancee.

Despite the advice of his draft attorney to keep "a low profile, he formed Nonviolent Action, a peace
group, with the support of Cesar Chavez and singer Joan Baez. The peace group's campaign to end the Vietnam war reached the halls of Congress with the help of Sen. George McGovern.

Viewers will see many amazing parallels between the polarization of the sixties and today's divided America. The doc is intended to carry on the altruistic spirit of the sixties and promote social justice and peace through nonviolence.

Language
English
Subtitles
He went to war with war 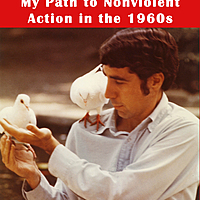