Stories of children escaping Nazi occupied Europe by fleeing to Lisbon, the only safe way out.

When Hitler invaded the majority of Europe and extended his pursue to the Jews in their territories, three million of them escaped south. No Jew was safe.

Under The Sky is a narrated movie about these stories of exodus illustrated by filmic archive captured during that time. Eight now elderly individuals, children back then, give voice to the trip that millions of jews had to take in order to escape the nazi regime, all of them heading to the last open port in Europe, the port of Lisbon, Portugal. 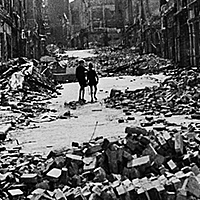