A Song for Dad

The Bass Player: A Song For Dad

â€œThe Bass Player: A Song for Dadâ€ was the critics choice in the Irish Times, The Irish Sunday Independent, the Sunday Business Post, and the Sun.

In this eloquent, witty homage to his father, filmmaker Niall McKay wrestles with his familyâ€™s unsettling past to overcome his fear of commitment. As Niall helps his elderly father Jim, a jazz bass player, return home to Ireland, father and son revisit Niallâ€™s tumultuous childhood with an abusive, unpredictable mother and a musician father who was often on the road. Itâ€™s a parallel journey into Niallâ€™s admiration for his father and his innermost doubts about love, and their conversations take on a confessional quality as they reveal their darkest moments. But the film lyrically (and sometimes limerickly) takes us full circle, cap 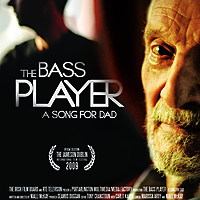