P.S. I Can’t Breathe provides a raw, uncensored glimpse into the Millions March NYC immediately AFTER a grand jury deliberated to not indict the officer responsible for Eric Garners death. Tens of thousands of protesters and social justice groups rallied together in NYC to urge lawmakers to take action against police brutality. Real interviews with the protesters capture the depths of hurt and anger in the community, along with their hope for justice and suggestions for solutions. 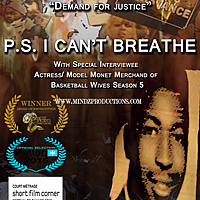