As Puerto Rico falls deeper and deeper into an unprecedented crisis this is Vietnam’s story, a poor community located on the coast of Guaynabo fighting an illegal expropriation at the hands of a career politician. Their experience echoes the island’s current struggle with; an unparalleled migration, a notion of progress fueled by corruption, displaced families whose land is being purchased by millionaires, and an almost non-existent reconstruction of infrastructure after Hurricane Maria.

Vietnam’s conflict is a casualty of The Guaynabo City Waterfront project, a mixed-use complex that includes a hotel, an aquarium, a boardwalk, among other things. This attempt at gentrification is eliminating a source of culture and identity for Puerto Rican people. A community that has lived on their little piece of coastline for over 70 years fell captive to political and societal forces whose interests lie purely in economic growth. But its residents won’t give up and their fight is just beginning. 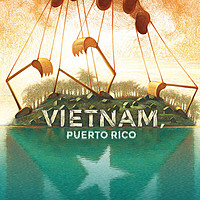