Pay It No Mind - The Life and Times of Marsha P. Johnson

She was a undisputed icon, the Statue of Liberty, the Eiffel Tower, and the Sphinx all in one.

Pay It No Mind - The Life and Times of Marsha P. Johnson

This feature-length documentary focuses on revolutionary trans-activist, Marsha "Pay it No Mind" Johnson, a Stonewall instigator, Andy Warhol model, drag queen, sex worker, starving actress, and Saint. "Pay It" captures the legendary gay/human rights activist as she recounts her life at the forefront of The Stonewall Riots in the 1960s, the creation of S.T.A.R. (Street Transvestite Action Revolutionaries) with Sylvia Rivera in the '70s, and a New York City activist throughout the '80s and early '90s. Through her own words, as well as in-depth interviews with gay activist Randy Wicker, former Cockettes performer Agosto Machado, author Michael Musto, Hot Peaches founder/performer, Jimmy Camicia, and Stonewall activists Bob Kohler, Danny Garvin, Tommy Lanigan-Schmidt, and Martin Boyce, Marsha's story lives on.

This doc screened at the IFC theater in NYC; the BFI in London, the Roxie in San Fran; the Clinton in Portland, Ore., the La Mutinerie in Paris, amongst other theaters worldwide. 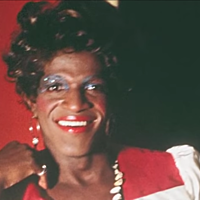