Coming home from war is just the beginning

The memory of combat never fades. In 2004, Jonathan Hancock fought in the Battle of Ramadi with the 2nd battalion, 4th Marines historically known as the Magnificent Bastards.  They suffered the highest casualty rate in the Iraq War. 1 in 4 were wounded or killed. Like many of his fellow Marine brother, Hancock began his battle with PTSD upon arriving back home.

In 2015, Jon embarked upon a monumental journey – 5,800 miles across the country... on foot. He set out to visit fellow veterans and families of the fallen, while confronting his own demons alone on the open road.

A natural storyteller overflowing with honesty, insight, heart and hilarity, Hancock is a bridge for connecting veterans to all those who love them, to civilians struggling to understand them, and to the communities that support them.

Bastards' Road is a story of pain, hope and redemption. 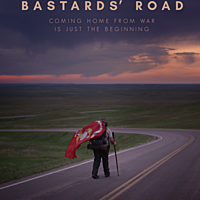