Living In The Past

Video from Living In The Past

Iran in the 1980s was a dark place. The country was a few years into its socially repressive 1979 Islamic revolution and Saddam Hussein’s Iraq had launched a brutal war against the new Islamic Republic. But progressive Iranians fought to shine a beacon of life in the darkness. One of them was Kamran Mellat.
Mellat was passionate about rock music and his mission was to share it with other Iranians. A generation of young people discovered The Rolling Stones, The Beatles, Bob Dylan, Leonard Cohen, Pink Floyd, The Doors, and many others thanks to his work. Jethro Tull was Mellat’s favorite band – inspiring him to call his underground music service Stereo Tull.
"Living In The Past," tells the story of Mellat’s success as well as his struggles and his eventual exile to Germany. People who benefited from his work attest to his influence on their own upbringing – and the risks Mellat and all his customers took to make it happen. 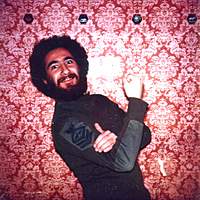