Between the Bottomlands & the World

Between the Bottomlands & the World explores Beardstown, IL, a rural Midwestern town of 6000 people--a place of global exchange and international mobility, inscribed by post-NAFTA (North American Free Trade Agreement) realities.
The video series tells a story of Beardstown in three acts.
Act One: Submerging Land, portrays a landscape massively engineered to redirect water for the production of commodity crops.
Act Two: Granular Space, is a meditation on the movement and scale of the international grain trade--from one seed to millions of bushels, moved from field, to elevator, to barge, to ocean going vessel.
Act Three: Moving Flesh, chronicles how and why so many people from around the world have come to Beardstown, a formerly all-white, Sundown town of 6000 people.
Moving Flesh is based on the research, analysis and fieldwork of Faranak Miraftab. See her book "Global Heartland" 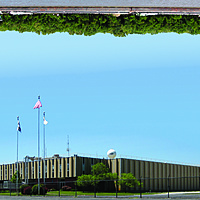