In the face of seismic cannon blasting the creature that spawned a legend may soon become myth.

In the frigid Arctic of Baffin Bay a sensitive biodiversity exists that the legendary narwhal calls home. In this remote and forbidding environment, drastically changing due to climate change, the Inuit depend upon hunting the narwhal for their survival. They are facing an uphill battle against big oil exploration that uses deadly seismic cannons that threaten to destroy the entire marine ecosystem.
The small Inuit hamlet of Clyde River, led by their conservation minded Mayor Jerry Natanine and his narwhal hunting cousin Sandy Kautuq, are championing the future of the narwhal by fighting the Canadian government for their ancient rights. But this summer the survey ships, with their detonating cannons, will begin blasting the waters of Baffin Bay with ear-splitting sonic bombs in their search for Arctic oil.
Jerry must rally Sandy and his community, as well as the world, to the aide of the narwhal before it is too late for the hamlet’s survival, and the narwhal fades into myth. 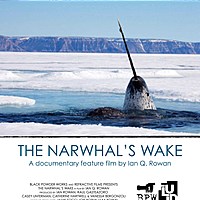