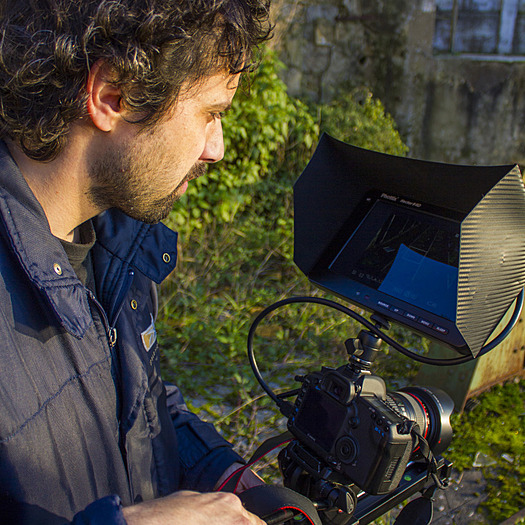 I’m a filmmaker trying to show my point of view of this crazy world we live in. I love to reflect about current and past issues and craft stories that point toward them. I know it’s utopian wanting to change the world, but what a hell I have to make my share! Directing a film for me is all about finding the perfect way to show my ideas, don’t get me wrong I don’t want to make propaganda bullshit, instead I aim for a call to action, I would love start a discussion about the issues I’m working about, being politics, personal stories, health issues, or even cinema itself. Please disagree with me and show me that I’m wrong! As a director that also works as editor, I give vital importance to all aspects of the film object: sound, composition and editing can tell us so many things in such subtle ways without having a single spoken word, and for that I carefully think in each aspect to take the best of the many possibilities they give.

I see myself as a highly motivated person, willing to work hard on a project if I believe that can turn into something meaningful. And I do think that we don’t have to work on the huge topics and personalities to make a difference, the smaller and unknown stories of unknown people can reveal us deeper truth too. I don’t have director super-ego, I mean, if I fall in love for a story or a project I’m willing to work in other (not smaller) functions even if my main motivation is directing.

I started out by working in a wide range of the audiovisual spectrum, shooting and editing music, wedding and even corporative videos, but about three years ago I found my motivation in documentary (I have some issues about this word because for me everything is cinema, and simply there are different approaches to it), and while attending to a master degree on Photography and Documentary Cinema I’ve directed a couple of short films, where I have to highlight Iterance. This short film is being screened in several film festivals, such as Curtas de Vila do Conde and Encontros de Cinema de Viana where I won an award. During 2015 I’ve shot a film about smuggling in the north border of Portugal with Spain during an artistic residence held by Filmes do Homem film festival and the short premiere this year in the first day of the festival (fun fact, I’ve worked as image assistant to the latest Lois Patiño’s film about the same subject but in the Spanish side, produced by Campus – a project of Curtas).

Please tell me about your ideas! We live in a time where communication is as simple as pressing a button; however, I feel that we communicate less each day.

To see Sergio Miguel SIlva's full profile (including skills, experience and contact information), you'll need to be logged in as a Professional.
Join or Log in