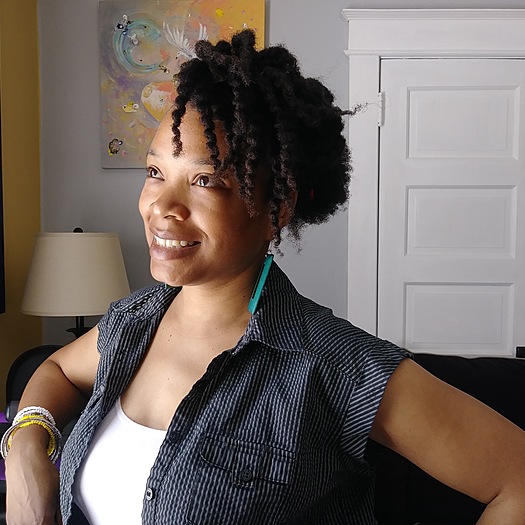 Somewhere Between Dc And South Philly, Depending On The Day, Maryland, United States

Malkia K. Lydia is a filmmaker and cultural worker who recovers authentic stories of community life. She has produced media content for Smithsonian Institution and National Civil Rights Museum exhibits. Most recently, she co-produced, directed and edited a half-hour documentary for A Dream Deferred, an exhibit about redlining in Philadelphia, funded by the Knight Foundation’s Cities Challenge. For the DC Commission on the Arts & Humanities’ Is Separate Ever Equal? gallery show, she created an archive-based video installation about education access that included her mom’s journey through school desegregation.

Malkia is directing two feature documentaries in collaboration with Mid-Atlantic African American communities created by the Great Migration. In Reunion Choir (working title), a retired DC high school music teacher, celebrated for changing her students' lives, tracks down hundreds of former protégés to sing together once more. What’s in a Name? follows a performance artist and three generations of Black men in his South Philly family. It is supported by Black Public Media and ITVS.

Malkia provides archival research and consulting for many independent productions. Her past work has been recognized and/or supported by the Maryland State Arts Council, IFP Documentary Lab, Prince George’s Arts & Humanities Council, Leeway Foundation, Greater Philadelphia Film Office, and Humanities DC. She was a Corporation for Public Broadcasting Producer Fellow at the 2014 International Public Television Conference in Helsinki. Malkia is an Associate of the Investigative Reporting Program at UC Berkeley and is active with Women in Film & Video DC, Creative Edge Collaborative, D-Word, and Scribe Video Center. She has extensive experience in community organizing, teaching and leadership development work. She graduated from DC Public Schools before earning her undergraduate degree in Public Policy Studies from Duke University and her MFA in Film & Media Arts from Temple University.

To see Malkia K. Lydia's full profile (including skills, experience and contact information), you'll need to be logged in as a Professional.
Join or Log in