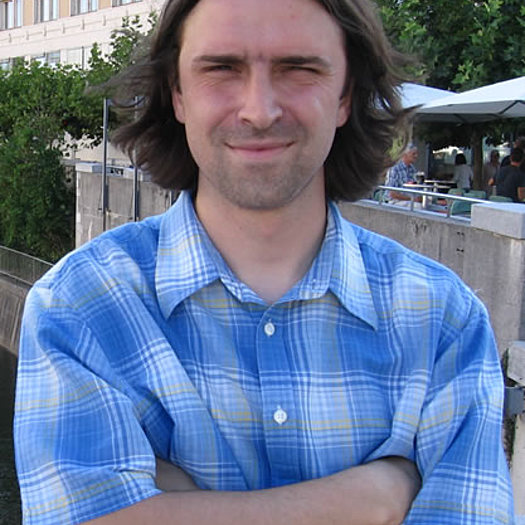 Born in Novi Sad in 1977, where he still lives. Finished general gimnasium in 1996, and entered Institute for Geography of the Faculty of Natural Sciences, University of Novi Sad. In â€™97, during Studentsâ€™ Protest, he had his first contact with journalism, as one of the editors of the Protest Bulletin. In journalism, he was engaged for â€œIN Radioâ€, â€œVojvodinaâ€ newspapers, TV production group â€œurbaNSâ€ (one of the reporters for â€œTV b92â€), â€œTV Apoloâ€, all from Novi Sad. In October 2000 entered â€œNovi Sad School for Journalismâ€, and in December of the same year, beside seven chosen colleges, was guest of the "Konrad Adenauer Stiftung", on ten-days workshop, held in Berlin, about media-system of the Germany. April 2001 he is accepted to educational project for TV journalism and technology, financed by EUâ€™s "Stability Pact for South-eastern Europe". This course is organised by â€˜Suedost medienagentur', production company from Bremen. Maj, June and July 2001 he spent in Sofia (Bulgaria), where he attended classes about basics of TV technology, equipment used in TV production, and through these three months he worked on daily basis on non-linear-editing and shooting techniques on various models of DV camcorders. Beside this, program included two hours a day of German language. During stay in Sofia he had insight of all relevant TV stations and private production groups. Four weeks of September 2001 he lived in Bremen, during course in â€œBremen Academy for Social Sciences and Communicationsâ€. Last days of September visited media-capital of Germany, Hamburg, visiting several media-outlets (RTL Nord TV, elephant seven marketing agencyâ€¦). In October program took him to Potsdam, near Berlin, to practice on regional TV station â€œORBâ€ (now â€œRBBâ€). From April 2002 he writes as a stringer for American web-site â€œSoutheast european Timesâ€ (www.setimes.com). In September 2004 he became student of production in audio-visual media on the Novi Sad Arts Academy. Since he was executive producer of several student films (â€œPrstenâ€, â€œRitam uspehaâ€, â€œTri Äasa izmeÄ‘u dva leta avionomâ€), and was engaged as organiser and interviewer for â€œPetrovaradin Tribeâ€, project focused on social impact of the EXIT festival, during which 60 minute documentary was made, and screened in Ljubljana, Belgrade, Zagreb and Novi Sad. From November 2005 till May 2006 member of international organising team of â€˜Shooting Europe 2006â€™, short film festival held in Karlsruhe, Germany (Program Responsible for â€˜Human Rightsâ€™ category). In 2006 completed his first self-produced documentary, â€˜Bilo jednomâ€¦â€™, which premiered in October 2006. Film was produced by independent production company â€˜Production i27!â€™, and Jovan made script, directed and was executive producer on the project. Film was screened on international film festivals in Slovenia and Croatia, as well as many times in Serbia. From Spring 2007 took part in international project â€œDivided Godâ€, focused on role of religion in modern world. Participants were from Turkey, Slovenia, Germany, Bosnia and Serbia, and groups from all countries made short docu-films in their homeland, as well as during round-trip in all of the cities involved (Mostar, Novi Sad, Ljubljana, Berlin and Istanbul). Currently preparing a new project, and the final exam at the Arts Academy.
To see Jovan Djerich's full profile (including skills, experience and contact information), you'll need to be logged in as a Professional.
Join or Log in