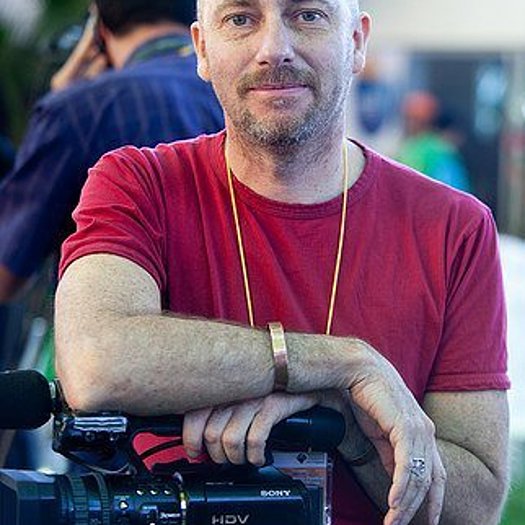 Velcrow Ripper is a Canadian Academy Award (Genie) winning filmmaker, writer, sound designer and public speaker. He creates powerful, cinematic documentaries that deal with the central issues of our times. He is currently in development with Metamorphosis, a feature documentary with support from the National Film Board of Canada and Super Channel, and in post-production with Illuminate, the epilogue to his epic Fierce Love Trilogy. Part one, Scared Sacred, was named one of Canada's Top 10 movies of 2004, and winner of the 2005 Genie (Canadian Academy Award) for best feature documentary. It continued with 2008's award winning Fierce Light: When Spirit Meets Action and most recently, Occupy Love. Ripper's earlier films include In The Company of Fear, a documentary on non-violent resistance to the  dirty war in Colombia; Golden Gate Award-winning Open Season, about bear hunters and the activists who hunt the hunters; and the multi-award-winning non-fiction feature Bones of the Forest, (co-directed with Heather Frise) about the struggle to save the ancient forests of British Columbia (Best of the Festival, 1996 Hot Docs! Festival; and Best Feature Doc, 1996 Genie Awards). Velcrow's films are stylistically innovative, engaging and moving. Particular attention is given to the sound design. He is well known for his award-winning sound design of such films as The Corporation (Best Sound, Leo Awards), and A Place Called Chiapas (Best Sound, Hot Docs!; Best Sound, Leo Awards). He was named one of the top ten filmmakers to watch by the Independent Film magazine.  Currently in post-production with the feature documentary "Metamorphosis" , co-directed with Nova Ami.