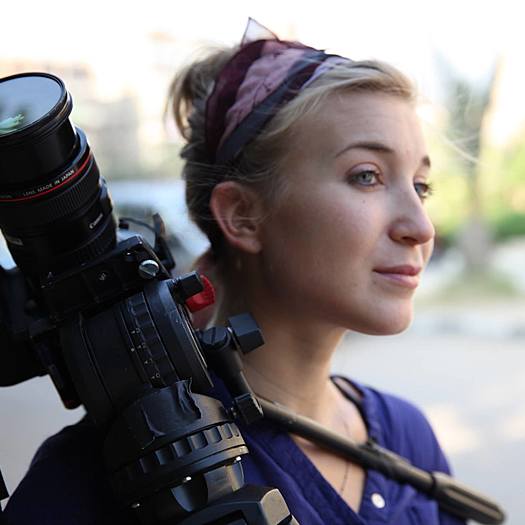 Rachel Beth Anderson, a Sundance award wining cinematographer, has filmed around the world in several conflict zones including Libya, Syria, Afghanistan, Egypt, Turkey, Liberia and South Sudan, for CNN â€œHeroâ€™sâ€, PBS Frontline, Human Rights Watch, and independent feature documentaries First To Fall and E-TEAM. Originally from North Dakota, Rachel graduated from the University of Nebraska-Lincoln Journalism school, where she filmed and co-produced a Robert F. Kennedy Journalism Award winning doc Breaking Down Barriers. Prior to graduating she participated in a Fulbright sponsored Journalism program based in Cairo, Egypt. This led Rachel to official relocate to Cairo in 2010 for her work as a cinematographer and journalist. During the 2011 Egyptian revolution Rachel worked as a videographer and field producer for PBS Frontline documentaries: Gigiâ€™s Revolution, and The Brothers. In 2013, she returned to shoot on the PBS Frontline follow-up film, Egypt in Crisis. Her footage from the 2011 uprising is also included in multiple long form documentaries including BBCâ€™s This World, Egypt â€“ Children of the Revolution, PBSâ€™s Before the Spring: After the Fall, independent films Zero-Silence and Uprising. Rachelâ€™s award winning documentary, First To Fall, was borne of a 8-month journey spanning the Libyan war. Her directorial debut film was a Gucci/TriBeCa grant recipient (2012) and had its World Premier screening at the International Documentary Film Festival (IDFA) in late 2013. In 2014 the film was a winner of two jury awards at the investigative journalism festival FIGRA, recently won the Grand Prix Jury Award at RIFF, and will be featured as the Best of Fest winner at the Columbus International Film Festival. The film has continued to screen over 30 times in a dozen countries. Most notably: the Human Rights Watch Film Festival in London/New York, the Frontline Club in London/Prauge, the Kickstarter Film Festival in New York/Los Angeles/London, the Bronx Documentary Center, Harvard University, and at the Bayeux-Calvados Award for War Correspondents. Rachel is currently based out of Brooklyn, NY.
To see rachel beth anderson's full profile (including skills, experience and contact information), you'll need to be logged in as a Professional.
Join or Log in