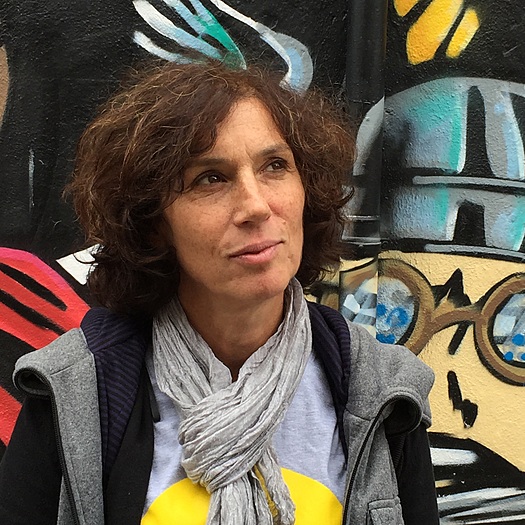 My work experience is varied. It includes: producing and editing short form, web content videos for various clients (TED Talks, About.com, Hearst Digital, The Neighborhood Playhouse Theater, The Dept of Education, etc.), field and segment producing for television (recent shows include “Chopped” The Food Network and “Young Marvels” Ovation) and producing and directing a full-length feature documentary, BECOMING MORE VISIBLE . In 2010 I was the studio-manager for an online video start-up (videoBIO), in 2007 I produced/directed an hour documentary for TLC, and since 1995 I have segment produced for the New York Times, the Food Network, HGTV and the Style  Network, to name a few. I’ve also directed multiple music videos and commercials, edited a Cannes-selected feature film, and in 2011, I won the Pepsi Refresh Challenge to make a socially conscious film on Greening the New York City’s Schools.

I am a New York based and am a proud mother of two. I specialize in fly-on-the-wall films; as seen in both Becoming More Visible (a film about five incredible Transgender young adults), and in GETTING IN… KINDERGARTEN an hour that aired on TLC about Manhattan parents struggling through the subculture of the NYC kindergarten admissions process. The film which shadowed three families, for over a year, showcased my ability to gain access into the lives and hearts of my subjects. In all my work – whether it’s Mick Jagger talking about the Rolling Stones, an anxious parent taking her child for an IQ test, a transgender teenager sharing her childhood memories or a heart attack survivor recounting a near-death experience, I try and capture the triumphs and tragedies of my subjects with intimacy and realism.

I began my career making independent avant-garde shorts with New York artists like Keith Haring. After a long and fruitful spell at MTV’s Music Video and Artist Profile unit, I went on to document and promote artists in dance, music, and the visual arts for Channel 13’s award winning, City Arts. My long involvement with the music scene led me to produce LISTEN SMART, an educational film about hearing loss within the music industry. Featuring emotional interviews with music icons like Ozzy Osbourne, Lars Ulrich (Metallica), Wyclef Jean and Moby – the film is on permanent exhibition at The Rock and Roll Hall of Fame.

In the summer of 2008, I felt the itch to be proactive both creatively and environmentally, and hit the city streets with my bike, a flip camera and a question “How would you make New York a Greener Apple”? A multitude of short films later, I created this grassroots campaign “A Greener Apple (NYC)”, where New Yorkers themselves tell how they would make their city of New York a “greener” place to live. In 2012, I produced – with the help of The NYC Dept. of Education, The Dept of Sanitation, and Grow NYC, a short film entitled GREEN GRADES – NYC Schools Recycle! and The NYC Schools Compost Training Video both seeds, to the educational film  “Green is the Word” http://www.youtube.com/user/Agreenerapplenyc – which was made possible with funding from a 2011 Pepsi Refresh Grant.