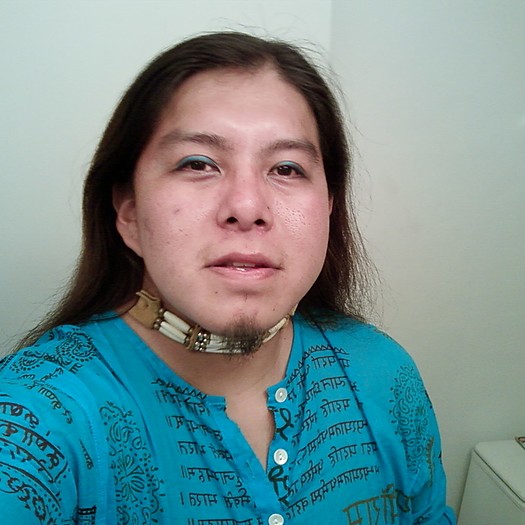 Houston Cypress belongs to the Otter Clan and is a member of the Miccosukee Tribe of Indians of Florida. ("Houston Cypress" is for the squares, though. Something for the Fuzz to scribble down after the Mug Shot. Call him Huey. If you're really interested, he'll tell you his real name.) Huey grew up in the Everglades of South Florida speaking Miccosukee as his primary language. Later, in school, he learned to speak the English and Spanish languages. Communication is very important to him. Especially so considering that there are less than 600 Miccosukees, approximately 3500 Seminoles, and nearly 300 Independent Miccosukees. He is interested in articulating the Living Narrative of the Society of Clans and their significance in a global context. (A medicine wheel: yellow, east; red, north; black, west; white, south -- counter-clockwise.) He is exploring the use of a variety of grammars and syntaxes and media to do so -- including wood, poetry, chant, cinema, touch, textiles, etc. He extends a welcoming hand to explore his home in the Everglades and offers a cool drink and a place to sit in the shade. He enjoys dirty jokes, exquisitely crafted shoes, avant-garde theater, home cooking, and the choreography of energy for the purposes of healing.
To see Houston Cypress's full profile (including skills, experience and contact information), you'll need to be logged in as a Professional.
Join or Log in