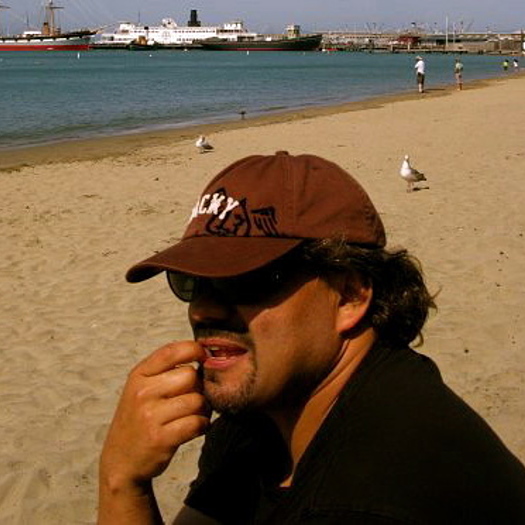 Roberto S. Oregel grew up in East Los Angeles. He earned his B.A. from UC Berkeley and both his M.A. in Latin American Studies and his MFA in Film Directing and Production from UCLA. Oregel is an independent filmmaker who has been writing, directing and producing documentary films for 15 years. His works represent a variety of film genres, including experimental, narrative, and documentary and deal with a range of subjects, from the creative process to the issues that impact underrepresented communities. The themes of social justice and human relations run through his films. Oregel's first films were in the Experimental genre. Downtown L.A. (2002) premiered at the Disney's Redcat Theater as part of a curated show titled Independent Los Angeles and Racing Thoughts (2003) premiered at the Los Angeles Latino International Film Festival. His interest in art led him to his next film, Gronk's Tormenta: A Method (2002), which screened at the Carnegie Art Museum, Boston Latino International Film festival and in Italy at the ASOLO film festival. In 2004, Oregel was one of five filmmakers chosen by Showtime Network to produce and direct films related to war. His film, Dominance and Terror: A discussion with Noam Chomsky, was nationally televised on Showtime and shown at festivals across the country. Oregel's first feature documentary, Casa Libre/Freedom House, was produced in collaboration with the UCLA Chicano Studies Research Center. Oregelâ€™s latest film, Eloy Take Two (2010), has been screened at several festivals across the country. In this film, Oregel collaborates with muralist, Eloy Torrez and actor/art collector, Cheech Marin. He is currently working on his next documentary, Obese City. Besides directing and producing, Oregel also teaches film classes at various Los Angeles Colleges.
To see Roberto S. Oregel's full profile (including skills, experience and contact information), you'll need to be logged in as a Professional.
Join or Log in