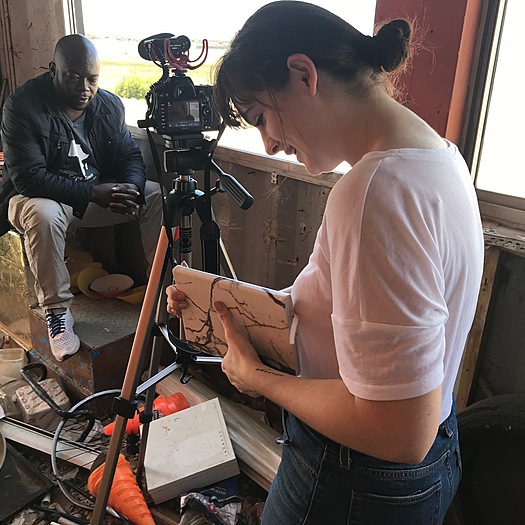 Kasha Sequoia Slavner is a Gen-Z, multi-award-winning first-time documentary filmmaker who comes to the profession as a seasoned photographer, entrepreneur and social justice advocate for over a decade. She was only 16 years old when she set out across the world for six months to make The Sunrise Storyteller and completed it upon returning to high school.

Using her passion for visual storytelling to make the world a better place, she was selected as the recipient of the very first Kim Phuc Youth Award for Peace . In addition, Kasha was selected for the class of 2017 Global Teen Leaders by legendary music producer Nile Rodgers’  We Are Family Foundation & TEDxTeen and was also selected into the inaugural cohort of the We Global Learning Centre's new social entrepreneurship program.  In 2018 she was chosen by Yunus & Youth as one of their Fellows and in 2019 selected by Global Changemakers to join their cohort. Most recently this committed changemaker became a Diana Award Holder, for sustaining positive social change in the memory of Diana, Princess of Wales. In 2019 she was chosen to be part of the inaugural launch of projects selected for the Voices of SDG16+ at the United Nations High Level Political Forum. In September 2019, she was spoke to over 750+ students at the United Nations for The International Day of Peace Student Observance on the topic of climate & peace. Recently she became a 2021 Climate Ambassador of the Global Youth Climate Network. Kasha is an 11x UN Youth Delegate, presenter, adjudicator and a long-time member of The Canadian Voice of Women for Peace, the former Ontario Regional Advisor for the Canadian Council of Young Feminists. She is a frequent public speaker and is an accredited expert for the  Women's Media Center, a non-profit co-founded by Gloria Steinem, Jane Fonda and Robin Morgan.

In addition, Kasha tours with a 32 piece photography exhibition “Travels into the Heart” and has completed a second large scale exhibit about Sustainable Development Goal #16 (Peace, Justice & Strong Institutions) - The exhibition is entitled Picture 16©  At 17 Kasha wrote & published her first 200+ page book of photography “Reflections of the Sunrise Storyteller – A Journey into the Heart as a Global Citizen”. She's a frequent public speaker, has been commissioned by  National Geographic Learning, is a contributor to Thrive Global, The Huffington Post, Good Magazine, Matador Network & appeared in several podcasts.

The Sunrise Storyteller is the young filmmaker’s first feature-length documentary, which she directed, filmed, scripted and edited. Since it’s release in 2017 it has screened at 60+ festivals and won 29 awards, including the Ron Kovic Peace Prize for the segment on Vietnam napalm survivor Kim Phuc, as well as the Eva Haller, Women Transforming Media Award.

Currently, Kasha is in development with her second feature documentary “1.5 Degrees of Peace” which is fiscally sponsored by The Redford Center

To see Kasha Sequoia Slavner's full profile (including skills, experience and contact information), you'll need to be logged in as a Professional.
Join or Log in