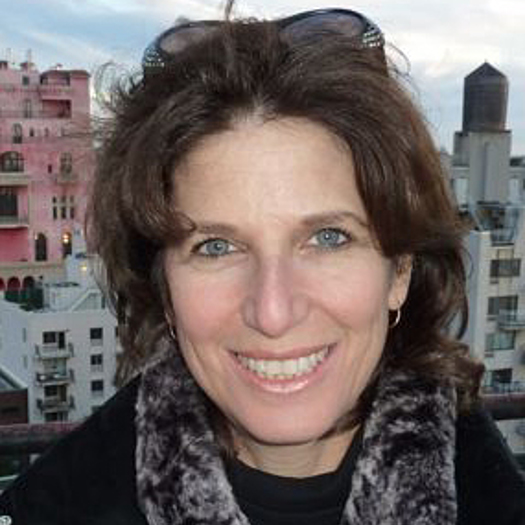 Gayle Kirschenbaum is an Emmy award-winning filmmaker, television producer, TEDx speaker and coach. She is the founder of the forgiveness movement called NO MORE DRAMA WITH MAMA inspired by the humbling reaction to her film, LOOK AT US NOW, MOTHER! Called the “Nora Ephron of documentaries,” Gayle turned the camera on herself in this deeply personal film about the transformation of a highly charged mother/daughter relationship from hatred to love. This is the “larger version” of her funny MY NOSE, in which we follow her mother’s relentless campaign to get her to have a nose job. Both festival award winning festival favorites played worldwide to rave reviews from Washington Post “Dazzling self-confidence” to the New York Times “Heartwarming story of forgiveness and acceptance”
Kirschenbaum created and stars in the film A DOG’S LIFE: A DOGAMENTARY, which premiered on HBO. It’s a wacky, poignant documentary about the positive effects of the bond between dogs and humans as told through Gayle’s story with her Shih Tzu, Chelsea.
Kirschenbaum created the reality shows that aired on TLC and Discovery, LITTLE PARENTS, BIG PREGNANCY, LITTLE PARENTS: FIRST BABY AND DWARF FAMILY ADOPTION, and the TLC series LITTLE PEOPLE, BIG CHARLIE and I’M PREGNANT AND MAY BE HAVING A DWARF.

Gayle co-created the television series JUDGEMENT DAY: SHOULD THE GUILTY GO FREE, whose pilot aired on HBO. She created and host the TV series MELTING TO, a food and culture show which is in development. Gayle created and hosted the video podcast series ON THE TRAIL which was distributed on the Itunes.
Kirschenbaum has written several screenplays in is in development on several TV series including OUT OF THE COFFIN, WHAT NOW, MOTHER! and BODY PARTS.

Gayle has been featured widely in the media including the New York Times, NBC’s Today Show, Los Angeles Times, Washington Post and Psychology Today. She founded the Writers on Hudson, is a member of Producers Guild of America, National Speakers Association, Women in Media, New York Women In Film & Television, Film Fatales and a judge for the Emmys.