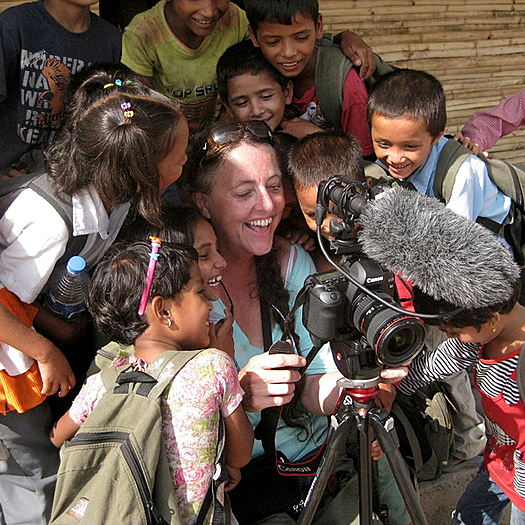 Gail Mooney is co partner of Kelly/Mooney Productions, a visual communications company based in the NYC metro area. Gail has over 30 years of experience, shooting for international magazines, major corporations, and institutions. Her clients have included: National Geographic, Smithsonian, Travel & Leisure, AT&T, American Express, and KPMG. A lifelong storyteller, Gail began her visual storytelling as a photographer. In 1999 Gail began producing and shooting video projects. Since then, her company has become fully integrated with motion. She has produced three short documentaries: Freedomâ€™s Ride â€“ a story about two diverse groups of high school students retracing the Civil Rights Movement of the 1960â€™s, The Delta Bluesmen and Through the Hearts and Hands of Children â€“ about the NJ Youth Symphony. Gailâ€™s true passion is to use her craft, be it via still imagery or motion, to create awareness and effect change. Her first feature length documentary, Opening Our Eyes has won numerous awards in film festivals, including Best Documentary at the Orlando Film Festival and Costa Rica Film Festival, Best of Fest at the Los Angeles International Womenâ€™s Film Festival, Best Humanitarian Documentary at the Bare Bones Film Festival and the Ojai Film Festival Theme Award â€“ â€œEnriching the Human Spiritâ€. Trailer www.openingoureyesmovie.com Gail is 1st VP on the National Board of ASMP and Chairs the Motion/Video Committee.
To see Gail Mooney's full profile (including skills, experience and contact information), you'll need to be logged in as a Professional.
Join or Log in